Visualizing a Riot: Where the Attacks on the Capitol Played Out

A flood of photographs of the insurrection at the Capitol came across news outlets and their Twitter feeds today. Many are remarkable individual documents, made by photojournalists who — let’s not forget this — put themselves at physical risk on the job. But the images are, to the vast majority o... More » 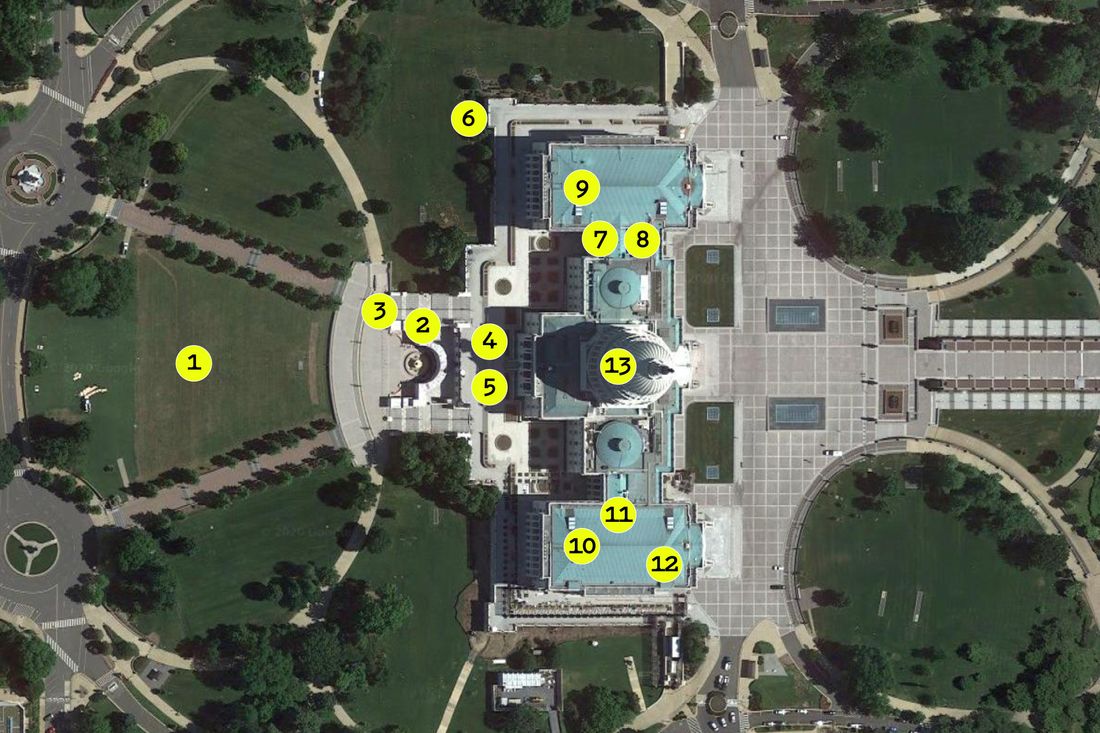 A flood of photographs of the insurrection at the Capitol came across news outlets and their Twitter feeds today. Many are remarkable individual documents, made by photojournalists who — let’s not forget this — put themselves at physical risk on the job. But the images are, to the vast majority of viewers who don’t know their way around Capitol Hill, a little hard to parse. We’ve put together a diagram of the approximate location of the day’s activities, as they progressed from the Mall through the doors and into the chambers of the House and Senate (not to mention Nancy Pelosi’s office).

1. Outside, converging on the Capitol. As the protests escalated into riots, the crowd approached from the eastern end of the Mall.

2. Security blocks the entrance on the West Front of the Capitol.

3. Scaling the outer rim of the portico.

4. As rioters close in on the main doors of the building, police deploy gas in an effort to disperse them.

5. The rioters, who seem to have first entered the building from the east, cross the interior and open the doors on the west front, breaking a window in the process. (See tweet below for video from inside the doors.)

Trump supporters breach the line of police, now having opened the Capitol on the front and back side as outside crowds rush into the building #January6th #Capitol #DC #WashingtonDC pic.twitter.com/qUobYiubT7— Brendan Gutenschwager (@BGOnTheScene) January 6, 2021

6. Protesters scale the perimeter wall at the building’s northeast corner.

7. On the staircase in the Senate wing.

8. In the second-floor corridor of the Senate wing. The white marble bust on the right is of Richard Nixon; the portrait at far left is of the ardent pro-slavery senator John C. Calhoun.

9. Inside the Senate chamber.

10. Sheltering in place in the gallery around the House of Representatives chamber.

11. Breaking into the House chamber. Inside, security officers draw their guns.

12. An invader occupies Nancy Pelosi’s ceremonial offices. They’re outside the House chamber; her main working space is in the nearby Longworth House Office Building.

13. A looter departs the House offices through the rotunda with a lectern bearing the Speaker’s seal.