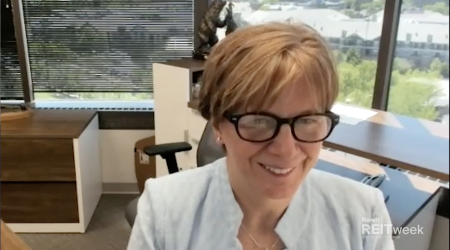 As mid-year approaches, “things are going gangbusters…customer demand has never been stronger,” Fischer said. Fundamentals have been improving each month this year and occupancy was at an all-time high at the end of April at 95%. Fischer said she expects the REIT to have strong momentum heading into the back half of the year.

Fischer also said National Storage is seeing a lot of deals come to market right now across all geographies, with concerns about potential changes in tax law and very low cap rates driving the elevated volume.

“We’re seeing significant amounts of capital chasing these transactions so cap rates will remain low and it’s challenging to win deals,” Fischer said. However, National Storage continues to benefit from its Participating Regional Operators (PRO) structure, in addition to its own corporate acquisitions team, which “allows us to get even more than our fair share of deals,” Fischer said. In fact, National Storage has raised its 2021 acquisition guidance by $100 million to $500 million to $650 million; “We have confidence in our ability to hit that range this year,” she added.

Meanwhile, the current strength in customer demand has alleviated a lot of the pressure of new supply, especially in Portland and Phoenix, Fischer said. Given that supply is unlikely to come roaring back in the near term, the backdrop for 2021 and 2022 “looks very favorable for self-storage,” she said.